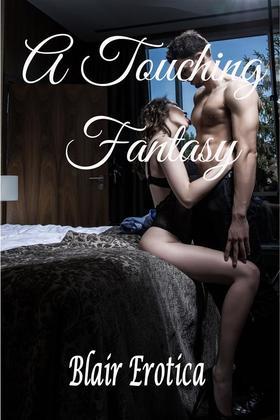 She must be touched. Jess has become obsessed by the sense of touch - not touching, but being touched. She wants to experience what it means to be touched free of the influence of knowing who is doing the touching. She wants to understand touch in isolation...and Debi is there to help.

She couldn't even classify that first touch as an intimate contact. It had been nothing more than a simple hip-to-hip brushing in a very popular club where all the very popular people met to…well, to brush together. Making contact, they called it, networking. Generally they (those popular people) didn't mean physical contact, but there it was, part and parcel of such evenings, leaving her hip burning from the stranger's touch, although the contact was slight as a passing thought. A passing contact. That it came to mean more to her than that was her own doing.

But there it was. And from then on she paid more attention to those casual bumps and strokes, noticed every sensual moment and, more interestingly, measured her own response to them all.

Her analysis revealed a deadly trap. A person touches you (feel the rush of awareness of the touch that makes the blood pound). But forget for the moment what they intended (or didn't. It might be an accident after all) or the circumstances of it. That awareness triggers the instinctive response to look and see who it is that was careless or intrusive enough to make physical contact. Intuitively she knew the danger that presented to her. The almost irresistible temptation to turn, to look, to identify the person she'd brushed up against ruined things. Consider what follows that look…a moment of awkwardness, in which she stares into the eyes of some man who is afraid she'll think him clumsy but has to worry equally she'll think he bumped into her on purpose (assuming that's not his intention). He returns her stare until she smiles disarmingly or makes some inane comment that allows them both to slip back into the shadows of other people. Even worse, she might look to see that he hasn't given the bumping of his hip into hers another thought. She turns and looks around foolishly trying to see who it was, and he is already talking with some other woman, touching her arm. Making contact. And so the accidentalness of the contact makes her feel silly. If he hadn't even noticed her, her arousal becomes a joke. A cruel joke.