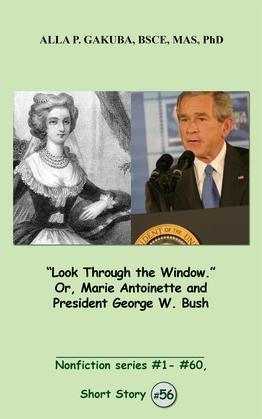 The British were French old enemy. Not to fight the British on French soil, the French King was financing America Revolution in 1775-1783 by heavily taxing his subjects. Queen Marie Antoinette never looked “thru the window” to see how her people lived. Soon, the French people became impoverished and revolved. They started their own French Revolution in 1989. Revolutionaries executed the King and sent Marie Antoinette to guillotine.

More than 200 years passed after the French Revolution, 1789, and history repeated itself on another continent, North America, in the USA, under President George W. Bush in 2000. As the French King Louis XVI, President Bush, started Afghanistan war to fight terrorists on their soil. Trillions of dollars are spent to fight terrorists.

And when economy crumbled and Financial Crisis of 2008 descended on the USA – President Bush was very surprised. He, as Marie Antoinette never “Looked through the window” to see what is going on in the country, how the American people live, and how economy is going…..