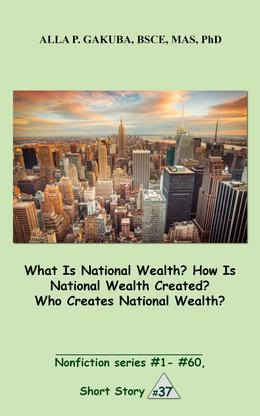 The history is full of examples how some nations became great and contributed to the development of civilization—all because they built national wealth. In the last 20 years no national wealth was built in the USA. Why is the creation of national wealth so important? Some examples. Egyptians: pyramids; Greeks: the Acropolis and Parthenon; the Romans: aqueducts and Coliseum; Machu Picchu; Taj Mahal in India; the Great Wall of China; the Suez Canal in Egypt; the Trans-Siberian Railway in Russia, Moscow subway; the Golden Gate Bridge in San Francisco, Empire State Building in New York City, the Hoover Dam in Arizona; High Dam in Aswan, Egypt; Eiffel Tower in Paris; telephone in 1876, computers,

first atomic weapon, Manhattan project, first satellite, Sputnik in 1957, the first moon landing in 1969, and many, many more.