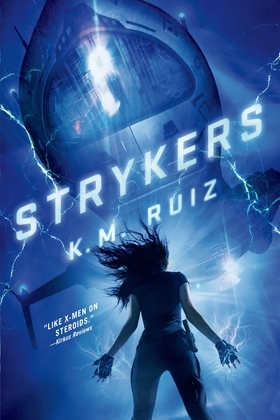 250 years after nuclear war, the dregs of humanity fight to survive on a ruined Earth while the rich and powerful plan to secretly ascend to another planet. But the enslaved soldiers of the elite rulers are a deadly new kind of human who are desperate for freedom and plan on fighting back against their masters.

Threnody Corwin, a psion with the ability to channel electricity like lightning through anything she touches, is a soldier for the human government. On a suicide mission, Threnody and her team of Strykers are recruited by an unknown enemy: Lucas Serca, one of the most powerful psions alive, who is masquerading as human. Forming an uneasy alliance, the two groups escalate their fight with the ruling government and worldwide chaos ensues. When a new kind of psion power is discovered that could reshape the wasted planet, the renegades must race to save society before it destroys itself, but the cost is high and in the end, there is no such thing as compromise.

In this novel from K.M. Ruiz, there is only survival.