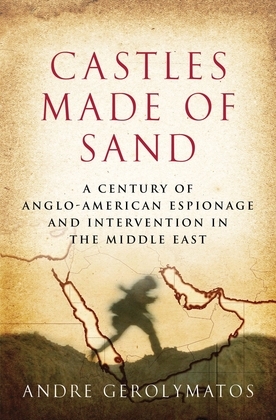 Castles Made of Sand

With roots in imperialism and the nineteenth-century mindset of the "Great Game," Western nations have waged an intricate spy game this past century to establish control over the Middle East, secure access to key resources and regions of commerce, and prevent the spread of Soviet communism into the region. From the Suez Canal to the former Ottoman Empire, British and American intelligence communities have conspired to topple regimes and initiate Muslim leaders as pawns in a geopolitical chess game fought against Marxist expansion.

Yet while the Iron Curtain was doomed to fall near the end of the twentieth century, this pattern of tunnel vision has created a different monster. The resulting resurgence of Muslim radicalism, and the induction of Arabs and other Muslims into the dark arts of espionage and sabotage, have only served to fan the flames in an already incendiary region and deepen the tensions between the Middle East and the West today.

An authority on international studies and the history of guerilla warfare, André Gerolymatos offers the contemporary reader insight into the intelligence game that is still waged internationally with lethal intent, and into the Middle Eastern terrorist networks that had evolved over the decades. In this definitive account of covert operations in the Middle East, the author brings to life the extraordinary men and women whose successes and failures have shaped relations, and he reveals how the explosive nature of the region today has direct roots in the history of American and Western intervention.