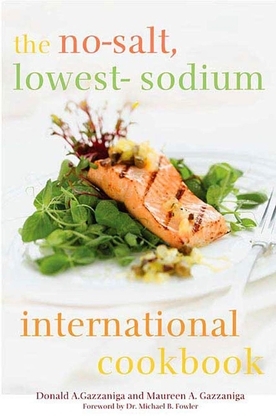 When a serious heart problem caused Don Gazzaniga to give up his career in communications, he was warned to keep to a diet with very little salt or other sodium. Undaunted, he discovered a way to continue enjoying the meals he loved and still keep his sodium level far below what most cardiologists feel they can expect from their patients.

The idea has led to three published books found on the kitchen shelves of thousands of grateful families dealing with congestive heart failure. First came a large general cookbook. It was followed by a baking book, and then a book of recipes for light meals and snacks. What could be next?

Before Don's illness, he and his wife, Maureen, traveled a lot. Don's job took him all over the globe. And wherever they went, they sought out that country's traditional dishes. When the light-meals book was finished, Don was looking for yet another low-sodium cookbook idea. He and Maureen pulled out their collection of recipes, did their magic of making them very low on sodium, and voilà! The No-Salt, Losest-Sodium International Cookbook is a delicious and healthy treat for the entire family.