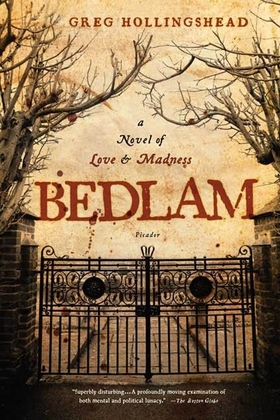 An extraordinary novel of three people caught up in the turmoil of the late eighteenth century, their lives intertwined in an age of war and revolution

Bedlam's eighteenth-century London is a city teetering between darkness and light, struggling to find its way to a more just and humane future. But in its darkest corners, where noblemen, pickpockets, royalists, and republicans jostle one another for power and where corruption is all in a day's work, Greg Hollingshead finds humanity, truth, decency, and forgiveness.
Conspiracies, plots, and paranoia sweep across England in the aftermath of the French Revolution, landing James Tilly Matthews in Bethlem Hospital, a notorious, crumbling home for the insane. Although he is clearly delusional, Matthews appears to be incarcerated for political reasons. Margaret, his beloved wife, spends years trying to free her often lucid husband, but she is repeatedly blocked by her chief adversary, John Haslam, Bethlem's apothecary and chief administrator. Haslam, torn between his conscience and a desire to further his career through studying his increasingly famous patient, becomes another puppet in a game governed by shifting rules and shadowy players.
Enlivened with wit and intellectual daring and written in prose that resonates with time and place, Bedlam sweeps the reader into a strange yet somehow recognizable world. From the enduring love of Matthews and his wife, to the despair of Bethlem's inmates, to the moral agonies of John Haslam, Greg Hollingshead's eye for rendering the human condition has never been finer. This is a novel that pulses with insight and compassion, in which imagination bridges the chasms between fantasy and reality, love and hate, and loss and reconciliation.