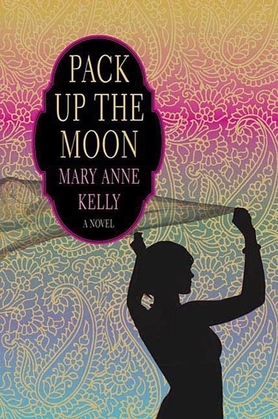 Pack Up the Moon

At the start, Claire Breslinsky is in Munich working as a model. She rents a room in a large apartment and meets a series of magical people---or so they seem to her. Isolde, her landlady and sister model, introduces her to a number of people, including Germany's leading movie star, a noted film photographer, a doctor whose popularity with the opposite sex matches his medical skills, and many more. It's a dream for Claire, who fled her home in Queens because of its constant reminders of her cop brother's death.

At a wine-soaked dinner party in Isolde's flat, it is noisily agreed that the odd assortment of friends will drive a string of caravans to India, taking photographs and filming along the way for a documentary that will eventually pay for the trip. And so the trek begins--during which Claire learns a good bit about India and a great deal more about men, women, and the voyages of the heart.

Mary Anne Kelly has been praised for bringing her characters to life. It's a skill that she uses to tremendous advantage in this wonderful new adventure.