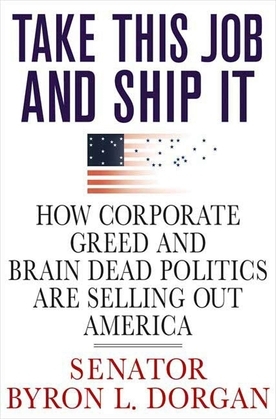 Take This Job and Ship It

Our trade deficit increases by $2 billion a day. Pharmaceutical companies and their lobbyists have such influence in Washington that Medicare, by current law, is not allowed to negotiate lower drug prices. We import oil on an ever-increasing scale, putting ourselves into dept with the Saudis, the Kuwaitis, and other Middle Eastern nations. With their windfall profits, they continue to buy American assets. China's booming economy and abundance of cheap labor are threatening our economic survival. We have mortgaged our fortunes, our principles, and our way of life.
In this comprehensive look at the real, human toll of America's unsound trade policy, Senator Byron Dorgan exposes the myth of "free trade." Indeed, free trade is not free; it is something that is slowly but surely draining away American prosperity. Sure, Chinese labor can drive down prices at Wal-Mart; at the same time, however, those saved wages-dollars that would have gone to buy these cheaper goods-are gone. Too soon, it will all come crashing down.
Major U.S. corporations continue to ship jobs overseas by the millions and, because of their influence in Washington, avoid paying a king's ransom in taxes. Many billions of dollars that these companies fleece from the government and the American people go overwhelmingly to investments in expanding production capabilities overseas. In short, our government is in the grip of corporate and foreign interests, and the American worker has born the brunt of this culture of corruption. How can we stem the tide of outsourcing? Why has the White House done nothing? Will the middle class survive?
From describing corporate profiteering to calling to action a lethargic, inactive government, Byron Dorgan exposes the truth about the destructive relationship between corporations and Congress and proposes strategies for what can really be done to preserve America's preeminence in the world.