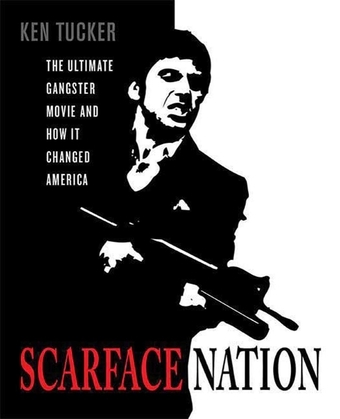 "Don't get high on your own supply."

Brian de Palma's brash, bloody version of Scarface was trashed by critics when it came out twenty-five years ago and didn't do well at the box office, but has become a spectacular fan favorite and enduring pop culture classic since.

"Never underestimate the greed of the other guy."

What makes millions of people obsess over this movie? Why has Al Pacino's Tony Montana become the drug kingpin whose pugnacity and philosophy are revered in boardrooms and bedrooms across America? Who were the people that made the movie, influencing hip-hop style and swagger to this day?

"The world is yours."

Scarface Nation is Ken Tucker's homage to all things Scarface?from the stars that acted in it to the influence it's had on all of us, from facts, figures and stories about the making of the movie to a witty and comprehensive look at Scarface's traces in today's pop and political culture.

You know you love the line. You know you've seen the movie more than once. Now dive into the ultimate book of Scarface?mounded as high as the pile of cocaine on Tony's desk with delicious details and stimulating observations.