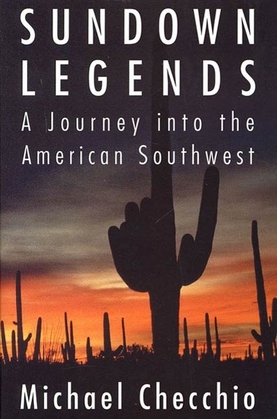 Standing atop the wall of California, Michael Checchio decided to head out for Saline and Death Valley, the canyonlands of Arizona and Utah and the uplands of New Mexico. He would re-visit old haunts and explore new ones-and in so doing rediscover a world he thought he already knew.
In Sundown Legends, Checchio offers up the American Southwest as a spiritual repository and source of inspiration. On his travels he talked to individuals whose imaginations have been shaped by the power of this desert landscape, including Ken Sleight, the Utah wilderness outfitter, who was the inspiration for a character in THE MONKEY WRENCH GANG and novlist John Nichols, author of the MILAGRO BEANFIELD WAR, who wandered into Taos in the late sixties and found a place to make his stand. Like Michael Wallis, Michael Checchio is a powerfully gifted writer who has created an intimate and lasting portrait of one of our last remaining wild places.