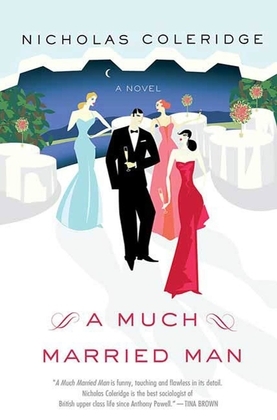 A Much Married Man

From one of the sharpest observers of the modern scene, comes this witty, intelligent, and irresistible novel in the tradition of Gosford Park and Snobs.

A man of wealth and privilege, Anthony Anscombe has everything he could ever want: an exquisite family estate, enviable social standing, and a desirable inheritance. But with all of his money and privilege, Anthony still has an aching desire for one thing: the perfect match. Running headlong into marriage is Anthony's forte?and his greatest weakness.
As Anthony surveys Winchford Priory, his beautiful Elizabethan house in the English countryside, Anthony has the distinct feeling that he's under siege. And he's absolutely right. He may be surrounded by his sprawling estate, but lurking in the village are more than one or two reminders of his complicated past, including three ex-wives, a mistress, and a legion of children and stepchildren, all dependent on him and all determined to do whatever it takes to get what they want.

Amanda: the ravishing first wife. Unpredictable and mesmerizing, she dared Anthony to fall in love with her, and he took her up on the challenge. Anthony was head over heels from the first night they danced on the rooftop of his family home. Of course, the free-spirited Amanda was never cut out for country life, but young love is blind.

Sandra: the steadfast second wife. Sturdy, dependable and domesticated, Sandra pulled Anthony back from the compelling chaos that surrounded his first wife. Sandra had plans to turn Anthony's estate into a proper family home, until a stunning secret forced her to make a life-altering decision.

Dita: the snobbish third wife. A true force of nature, Dita was smart, tough, rapaciously social and high-maintenance. She enthusiastically stormed through Anthony's life, organizing and rearranging, and rubbing plenty of people the wrong way, particularly the previous Mrs. Anscombes and their children.

With the entire cast of his life roosting in the village, it's no wonder Anthony doesn't have a minute's peace! Adding to the crazy mix is the mistress, Nora, a new age hippy and acupuncturist, whom Anthony seduced with disastrous consequences.

A Much Married Man is a wickedly funny social satire with memorable characters that will stay with readers long after the final page. Like a modern day Edith Wharton or Anthony Trollope, Nicholas Coleridge delivers a sensational glimpse inside the salacious world of the upper classes.