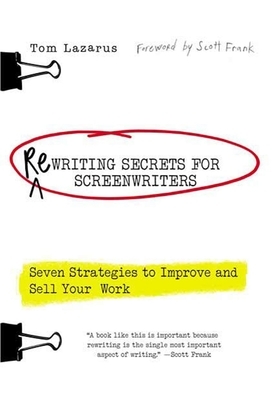 Every screenwriter needs to rewrite?more than once, probably many times?to make the story work and then to make a sale. And then again later on, to please producers, studios or stars. Tom Lazarus--author of "Stigmata", among other scripts--is a working screenwriter and professor at UCLA extension. In this book, he's distilled his own experience and that of other screenwriters into a system. SECRETS OF FILM REWRITING will teach writers how to:

Hugely valuable to first-time screenwriters and to grizzled veterans of Hollywood pitch wars alike, SECRETS OF SCREENPLAY REWRITING is larded with humor and attitude as well as information. Its anatomy of a screenplay rewrite breaks down the book's lessons into their practical application?a must for anyone looking for a break in the film business.