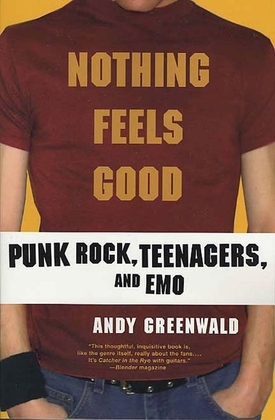 Nothing Feels Good: Punk Rock, Teenagers, and Emo tells the story of a cultural moment that's happening right now-the nexus point where teen culture, music, and the web converge to create something new.

While shallow celebrities dominate the headlines, pundits bemoan the death of the music industry, and the government decries teenagers for their morals (or lack thereof) earnest, heartfelt bands like Dashboard Confessional, Jimmy Eat World, and Thursday are quietly selling hundreds of thousands of albums through dedication, relentless touring and respect for their fans. This relationship - between young people and the empathetic music that sets them off down a road of self-discovery and self-definition - is emo, a much-maligned, mocked, and misunderstood term that has existed for nearly two decades, but has flourished only recently. In Nothing Feels Good, Andy Greenwald makes the case for emo as more than a genre - it's an essential rite of teenagehood. From the '80s to the '00s, from the basement to the stadium, from tour buses to chat rooms, and from the diary to the computer screen, Nothing Feels Good narrates the story of emo from the inside out and explores the way this movement is taking shape in real time and with real hearts on the line. Nothing Feels Good is the first book to explore this exciting moment in music history and Greenwald has been given unprecedented access to the bands and to their fans. He captures a place in time and a moment on the stage in a way only a true music fan can.