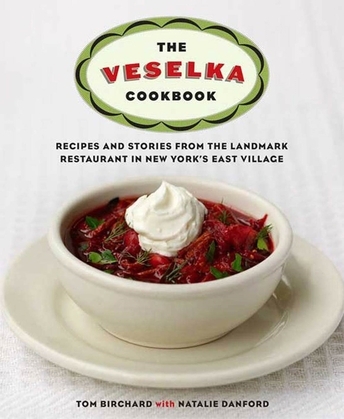 For more than fifty years, customers have crowded into Veselka, a cozy Ukrainian coffee shop in New York City's East Village, to enjoy pierogi, borscht, goulash, and many other unpretentious favorites. Veselka (rainbow in Ukrainian) has grown from a simple newsstand serving soup and sandwiches into a twenty-four-hour gathering place, without ever leaving its original location on the corner of East Ninth Street and Second Avenue. Veselka is, quite simply, an institution.

The Veselka Cookbook contains more than 150 recipes, covering everything from Ukrainian classics (potato pierogi, five kinds of borscht, grilled kielbasa, and poppy seed cake) to dozens of different sandwiches, to breakfast fare (including Veselka's renowned pancakes), to the many elements of a traditional Ukrainian Christmas Eve feast.

Veselka owner Tom Birchard shares stories about Veselka's celebrity customers, the local artists who have adopted it as a second home, and the restaurant's other lesser-known, but no less important, longtime fans, and he offers a behind-the-scenes look at what it takes to serve five thousand gallons of borscht a year and to craft three thousand pierogi daily---all by hand.

The Veselka Cookbook will delight anyone with an interest in Ukrainian culture, New York City's vibrant downtown, and the pleasures of simple, good food.