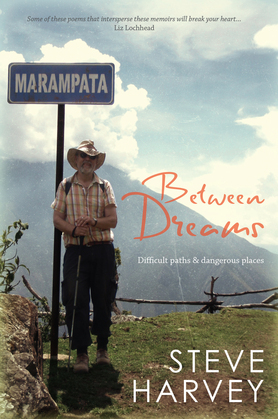 Steve Harvey was in the same class at school as Sting in the sixties, on ‘the Fringe’ with Liam Neeson in the seventies; spent a day with Spike Milligan; spent several months travelling round India by steam train; went round the world; taught on Tyneside; joined the police; breathalysed Gazza; was on the front line at ‘the Battle of Orgreave’ during the Miners’ Strike (although he loathed Thatcherism); was appointed to set up his force’s Paedophile Unit in the nineties; ran creative writing courses in an old mill with outbuildings he bought in Normandy with tutors including A L Kennedy; taught English as a volunteer in northern Iraq in 2004 (and visited Baghdad); ran the national Fatherhood Project in Scotland; was Safety & Security Officer for an international NGO in South Sudan; wrote a novel set in Africa; in 2010 travelled around New Zealand with his nineteen-year-old son for two months, working on farms and vineyards for our keep and then spent three months backpacking alone around South America.
This is the story of his life so far.