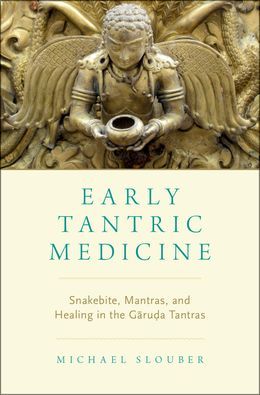 by Michael Slouber (Author)
Buy for $97.99 Excerpt
Nonfiction Religion Hinduism History History by country Asia India Social science Anthropology
warning_amber
One or more licenses for this book have been acquired by your organisation details

Snakebite may sound like a rare and exotic phenomenon, but in India it is a problem that affects 1.4 million people every year and results in over 45,000 deaths. A traditional medical system that flourished over 1,000 years ago, the Garuda Tantras had a powerful influence on medicine for snakebite, and some of their practices remain popular to this day. In Early Tantric Medicine, Michael Slouber offers a close examination of the Garuda Tantras, which were deemed lost until the author discovered numerous ancient titles surviving in Sanskrit manuscripts written on fragile palm-leaves.

The volume brings to life this rich tradition in which knowledge and faith are harnessed in complex visualizations accompanied by secret mantras to an array of gods and goddesses; this religious system is combined with herbal medicine and a fascinating mix of lore on snakes, astrology, and healing. The book's appendices include an accurate yet readable translation of ten chapters of the most significant Tantric medical text to be recovered: the Kriyakalagunottara. Also included is a critical edition based on the surviving Nepalese manuscripts.
Tying in to interest in holistic medicine, meditation, and Tantra, this volume sheds light on a nearly forgotten piece of history.