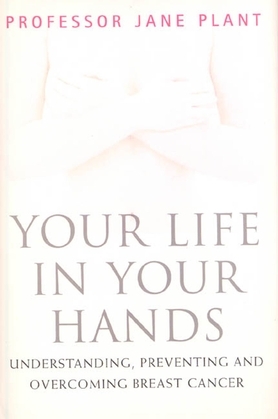 Your Life In Your Hands

One out of nine women in the United States will develop breast cancer in her lifetime. In fact, it is the second leading cause of cancer death for women (after lung cancer) and the leading overall cause of death in women between the ages of forty and fifty-five. For too long women have erroneously believed that there is little or nothing they can do to prevent this dread illness. Our major medical efforts are directed toward detecting and treating, rather than preventing, breast cancer.

Professor Jane Plant, one of Britain's most eminent scientists, contracted breast cancer in 1987. She had five recurrences, and, by 1993, the cancer had spread to her lymph system. When orthodox medicine gave up and she was told that she only had three months to live, she determined to use her extensive scientific training and her knowledge of other cultures to find a way to survive. In her research, she was startled to find that in China breast cancer affects far fewer women than in Western countries. Plant considered that there could be a dietary trigger for the illness. As she continued her scientific investigations, she became convinced that there was a causal link between consumption of dairy products and breast cancer.

Jane Plant finally defeated her breast cancer, in part because she used her training and knowledge as a natural scientist to understand it-- and then overcome it. Combining the diet her research had led to with traditional medical treatment, Professor Plant was not only able to triumph over her own disease but also to pass on what she had discovered to help more than sixty other women successfully fight their breast cancer.

In this book, women will be presented for the first time with a compelling body of evidence strongly suggesting that consumption of dairy products may cause breast cancer. It will demonstrate the specific changes that women can make in their day-to-day lives to help prevent and treat breast cancer. With a clear statement of the scientific principles behind her discovery, Professor Plant includes detailed suggestions for ways to alter your diet by eliminating or reducing consumption of many suspected cancer-causing agents, especially dairy products, and replacing them with healthful alternatives. She offers as well detailed menus and recipes to help you make the transition and enjoy it.

Your Life in Your Hands is a revolutionary book that will change the lives of millions of women.