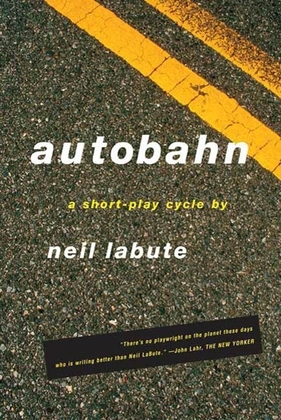 "Sitting in an automobile was where I first remember understanding how drama works...Hidden in the back seat of a sedan, I quickly realized how deep the chasm or intense the claustrophobia could be inside your average family car." --Neil LaBute

Be it the medium for clandestine couplings, arguments, shelter, or ultimately transportation, the automobile is perhaps the most authentically American of spaces. In Autobahn, Neil LaBute's provocative new collection of one-act plays set within the confines of the front seat, the playwright employs his signature plaintive insight to great effect, investigating the inchoate apprehension that surrounds the steering wheel. Each of these seven brief vignettes explore the ethos of perception and relationship--from a make-out session gone awry to a kidnapping thinly disguised as a road trip, a reconnaissance mission involving the rescue of a Nintendo 64 to a daughter's long ride home after her release from rehab. The result is an unsettling montage that gradually reveals the scabrous force of words left unsaid while illuminating the delicate interplay between intention and morality, capturing the essence of middle America and the myriad paths which cross its surface.