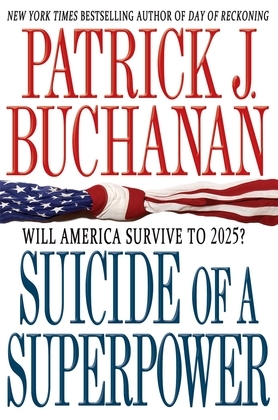 Suicide of a Superpower

America is disintegrating. The "one Nation under God, indivisible" of the Pledge of Allegiance is passing away. In a few decades, that America will be gone forever. In its place will arise a country unrecognizable to our parents. This is the thrust of Pat Buchanan's Suicide of a Superpower, his most controversial and thought-provoking book to date.

Buchanan traces the disintegration to three historic changes: America's loss of her cradle faith, Christianity; the moral, social, and cultural collapse that have followed from that loss; and the slow death of the people who created and ruled the nation. And as our nation disintegrates, our government is failing in its fundamental duties, unable to defend our borders, balance our budgets, or win our wars.

How Americans are killing the country they profess to love, and the fate that awaits us if we do not turn around, is what Suicide of a Superpower is all about.