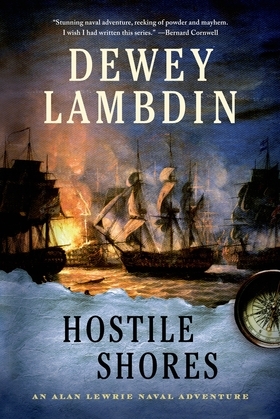 "Lambdin is closing on Patrick O'Brian as the most prolific historical novelist to celebrate a Royal Navy mariner." ?Washington Times

In 1805, with news of Admiral Nelson's death fresh on his mind, Captain Lewrie's HMS Reliant joins up in the voyage that will culminate in the Battle of Cape Town, in which the British wrested control of South Africa from the Dutch. In the wake of that victory, Lewrie heads west to South America, where Britain's attacks on Buenos Aires and other Spanish colonies have not been faring as well. But the worst is yet to come, and soon Lewrie will be facing a battle at sea that will put his naval career and life at risk.

Dewey Lambdin has been roundly praised as one of the best living novelists writing in the vein of Patrick O'Brian and C. S. Forester. In Hostile Shores he returns with an exciting, battle-heavy tale of life in the King's Navy, starring the rough-edged hero Captain Alan Lewrie.