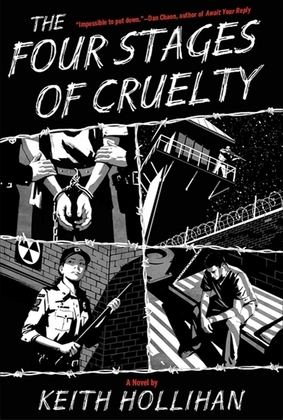 The Four Stages of Cruelty

Ditmarsh Penitentiary holds many secrets within its walls. A maximum-security prison, it contains every breed of hatred, self-destruction, greed, and regret. Its inmates aren't the only ones who grapple with these emotions. Under constant threat yet given absolute authority, the guards routinely cross the divide between law enforcement and criminality.

Corrections Officer Kali Williams takes pains to avoid the complicated traps of inmates and guards alike. Then a young inmate named Joshua comes to her for help. He claims that another prisoner has drawn an elaborate comic book, which holds a guide to the illicit underworld of Ditmarsh. The struggle to obtain the information encoded in its pages has been the cause of ever-increasing violence throughout the prison.

At first Kali can't take Joshua seriously. But soon afterward, the artist-inmate disappears completely. As she retraces his steps, she enters a labyrinthine world inside the prison with unexpected connections to the outside world. Along the way, she uncovers the most bewildering secret of all ...

Keith Hollihan's The Four Stages of Cruelty is a story of the mystery of human compassion, the twisted forms it can take, and the violence and redemption it makes possible.