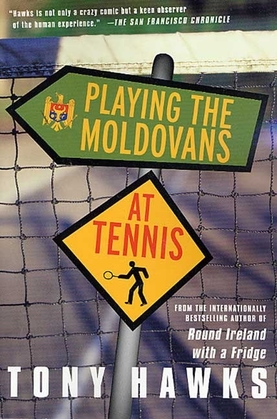 Playing the Moldovans at Tennis

It doesn't take much - "£100 is usually sufficient" - to persuade Tony Hawks to take off on notoriously bizarre and hilarious adventures in response to a bet. And so it is, a pointless argument with a friend concludes in a bet - that Tony can't beat all eleven members of the Moldovan soccer team at tennis. And with the loser of the bet agreeing to strip naked on Balham High Road and sing the Moldovan national anthem, this one was just too good to resist.

The ensuing unpredictable and often hilarious adventure sees him being taken in by Moldovan gypsies and narrowly avoid kidnap in Transnistria. It sees him smuggle his way on to the Moldovan National Team coach in Coleraine and witness (almost) divine intervention in the Holy Land.

In this inspiring and exceptionally funny book, Tony Hawks has done it again, proving against all odds that there is no reason in the world why you can't do something a bit stupid and prove all of your doubters wrong. Or at least that was the idea....