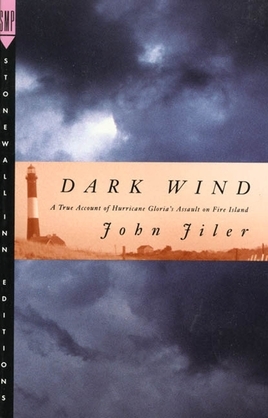 September 25, 1985. The worst storm in half a century is headed towards the United States, her point of landfall--Fire Island, a narrow sandbar hugging the shore of Long Island. The East Coast is evacuated for hundreds of miles north and south, but on Fire Island itself, ten people refuse to leave.

In Dark Wind, a remarkable work of nonfiction, John Jiler tells the story of those people. A gay man with AIDS stayed behind because he had nothing left to lose. One pair of fiends tried to endure the storm with deep, meditative prayer; another trio, with a wild, chattering cocktail party. Also on the island lay the Sunken Forest, an ancient woods teeming with birds, plant, and animal life that was no less profoundly threatened by the power of Hurricane Gloria.

In this literary tour de force, Jiler combines the results of in-depth interviews with the survivors and detailed knowledge of the unique social and natural history of Fire Island to produce a panoramic account of nature in its inexplicable, sublime fury.