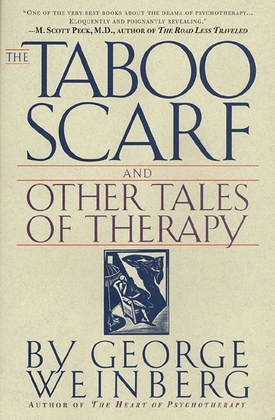 Every decade, a rare work of nonfiction comes along that offers readers an intimate and compelling glimpse of the deep secrets of behind the wondrous human psyche. George Weinberg's The Taboo Scarf and Other Tales of Therapy is such a book, a stunning literary tour de force by the nationally prominent psychotherapist that elaborates on the frailties and fears that define the human condition.

In the title story, Weinberg introduces us to Maggie, a troubled graduate student in paleontology who gradually comes to realize that her terror of being kissed stems from the emotional trauma she suffered at the hands of her brutal and dissolute father.

Like "The Taboo Scarf," the bittersweet irony of "The Beacon" concerns itself with a young woman and her fear of intimacy in a harsh, urban world. In this poignant tale, we follow Lisa, a young self-effacing woman working as an usherette who must come to terms with the fact that she was raised by a call girl who served as her mother.

These two stories and seven others suggest that "tales from the couch," when presented by a skilled and sympathetic psychotherapist such as George Weinberg, can create a narrative as full of momentum and passion as the most moving and finely crafted fiction. Indeed, as the patients unveil themselves through the mesmerizing processes of their therapy, the reader identifies with his own predicament and, in effect, comes to a better understanding of his own past and consciousness.

This is not just a work of nine finely interwoven stories of haunting psychological drama, but an impressive literary undertaking by a psychologist whose timely works have filled numerous best-seller lists for the last two decades. The Taboo Scarf and Other Tales of Therapy is a wistful, unforgettable work, a book that, above all, embraces the heart of the human condition.