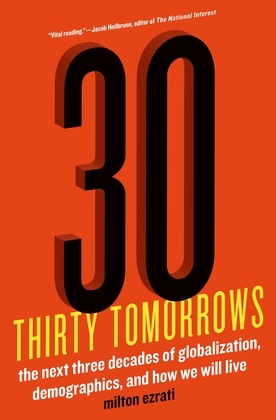 "This book is a forecast."

Over the next three decades, the aging populations in America, Europe, and Japan will begin to threaten our way of life. The ever-increasing pool of retirees will burden relatively diminished workforces, slowing the pace of growth and straining public and private finances. In stark contrast, the emerging economies---India, Brazil, and China prominent among them---enjoy the benefits of large, youthful, and eager workforces, and will do so for years to come. As seasoned economist Milton Ezrati argues, these demographic differences will set the economic and financial tone for the next three decades or more.

But the author argues the future is nonetheless brighter than the media forecasting will have you believe. We can survive---and even thrive---in the face of challenges that force radical change on our workforce. America has the capacity to lead the globe in making needed reforms, including increasing the participation of women in the workplace, creating generally longer working lives, changing what and how economies produce, and much more.

Ezrati's book will be a game changer for investors, owners of businesses both big and small, and for anyone else interested in prediction of what the future holds.