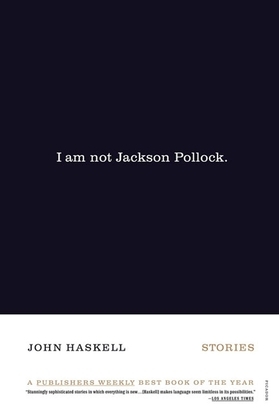 I Am Not Jackson Pollock

A bewitching collection of short fiction-haunting and hypnotic meditations on art, movies, literature, and life

A circus elephant named Topsy was executed at Coney Island in the year 1900 for killing a man. That's true. So is the life of Saartjie (Sar-key) Baartman, the Hottentot Venus, who was herself a circus act in the first half of the nineteenth century. What is myth is the Indian god Ganesha, whose head was lopped off by his father, Shiva, and replaced-with an elephant's head-by his disconsolate mother, Parvati. In John Haskell's expert hands, these three curious strands are ingeniously woven together in one story called "Elephant Feelings."

And so it goes with the rest of these dreamy meditations on the lives of artists, actors, writers, and musicians who are at once painfully human and larger than life. In "Dream of a Clean Slate," Jackson Pollock the man struggles with the separation he feels from Jackson Pollock the artist; in "The Judgment of Psycho," Haskell probes the sexual dynamic of Janet Leigh and Anthony Perkins in Psycho, and then delves into a different relationship, the one between Hector and Paris in the Iliad; Orson Welles presides over the long story "Crimes at Midnight," a tense evocation of desire and its consequences. Haskell has written a series of myths for modern times, stories about the ways in which we are distant from ourselves and about the way art can sometimes help us imagine other worlds and other possibilities. It is an astonishing debut.