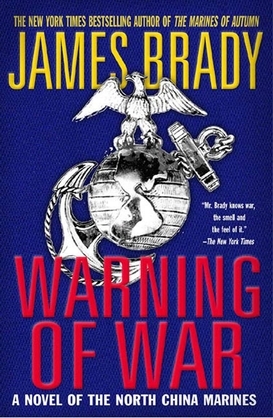 The New York Times Bestselling Author of The Marines of Autumn

Half the world is at war and with the other half about to join in, a thousand U.S. Marines stand sentinel over the last days of an uneasy truce between ourselves and the Imperial Japanese Army in chaotic North China.

By November 27, FDR is convinced Japan is about to launch a military action. Washington doesn't know where, isn't sure precisely when. But the Cabinet is sufficiently alarmed that War Secretary Henry Stimson and Secretary of the Navy Frank Knox are authorized to send an immediate and coded "warning of war" to American bases and units in harm's way.

In Shanghai two cruise ships are chartered and 800 armed American Marines are marched through the great port city with enormous pomp and circumstance and embarked for Manila.

Another 200 Marines, unable to reach Shanghai, and serving in small garrisons and posts from Peking to Mongolia and the Gobi Desert, are caught short by this "warning of war."

This is their story. Of how a detachment of American Marines marooned in North China as war erupts, set out on an epic march through hostile territory in an attempt to fight their way out of China and, somehow, rejoin their Corps for the war against Japan.

James Brady dazzles us once again with a stunning and unflinching look at America at war. Warning of War is a moving tribute to sheer courage, determination, and Marine Corps discipline, and is a wonderful celebration of America in one of its darkest but finest hours.