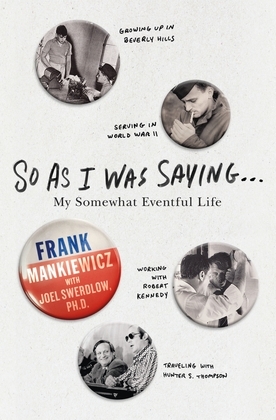 ?I first met Robert Kennedy because I spoke Spanish. I spoke Spanish because the U.S. Army taught me that before sending me to France, Belgium, and Germany to fight Hitler?s Army. This makes complete sense if you are familiar with military bureaucracy.?

Such is the trademark wit of Frank Mankiewicz. With his dry sense of humor and self-deprecating humility?despite his many accomplishments?Frank?s voice speaks from the pages of So as I was Saying... in a way that is both conversational and profound. Before he died in 2014 Frank?s fascinating life took him from Beverly Hills to the battlefields of Europe; from the halls of power in Washington D.C. to the far corners of the world. A lifelong student of humanity and mentor to many, including presidents, Frank was a loving father, husband, and friend, and his legacy is will endure for generations.

Born into Hollywood royalty but determined to make his own way, Frank served in World War Two, wrote speeches for Robert Kennedy, ran a presidential campaign, carried messages to Fidel Castro, served as president of National Public Radio (helping create Morning Edition), and as regional director for the Peace Corps. Naturally such a long and interesting life gave rise to a myriad of opinions, and Frank was not afraid to share them. In this intriguing, insightful, and often humorous memoir, Frank recalls his favorite memories while sharing his opinions on everything from Zionism to smartphones. Imbued with the personality of one of the twentieth century?s most gifted raconteurs, So As I Was Saying... invokes nostalgia for the past even as it gives hope for the future.