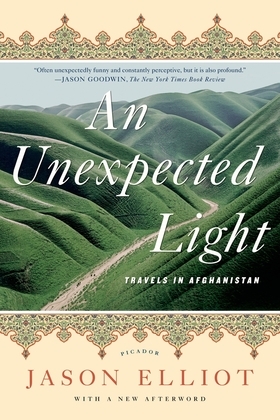 Part historical evocation, part travelogue, and part personal quest, An Unexpected Light is the account of Elliot's journey through Afghanistan, a country considered off-limits to travelers for twenty years. Aware of the risks involved, but determined to explore what he could of the Afghan people and culture, Elliot leaves the relative security of Kabul. He travels by foot and on horseback, and hitches rides on trucks that eventually lead him into the snowbound mountains of the North toward Uzbekistan, the former battlefields of the Soviet army's "hidden war." Here the Afghan landscape kindles a recollection of the author's life ten years earlier, when he fought with the anti-Soviet mujaheddin resistance during the Soviet occupation of Afghanistan.

Weaving different Afghan times and visits with revealing insights on matters ranging from antipersonnel mines to Sufism, Elliot has created a narrative mosaic of startling prose that captures perfectly the powerful allure of a seldom-glimpsed world. Jason Elliot's An Unexpected Light is a remarkable, poignant book about Afghanistan and a heartfelt reflection on the experience of travel itself.