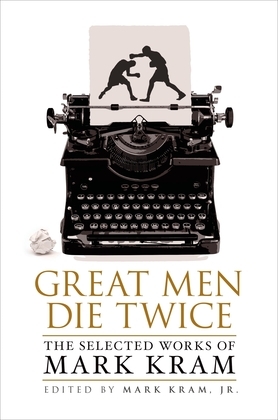 Imagine Mad Men set not in the advertising world but at 1960s Sports Illustrated, a place where the finest sports staff of any generation was attended by an open bar and almost unlimited expense account. This was the world Mark Kram lived and wrote in, along with his peers including Frank Deford, Dan Jenkins and other major talents. A high school graduate with a gift for revealing the hearts of his subjects, Kram would become one of the greatest sports writers of all time, covering the famed rivalry between Muhammad Ali and Joe Frazier, Negro League baseball star Cool Papa Bell, doomed soccer legend George Best, Olympic gold medal sprinter Edwin Moses, and others.
The New York Times obituary of Kram in June, 2002 saluted his work in Sports Illustrated by calling him one of its "most lyrical writers of the 1960s and 1970s." Great Men Die Twice selects his best work with a moving introduction by his son, Mark Kram Jr., the PEN/ESPN Award-winning author of Like Any Normal Day.