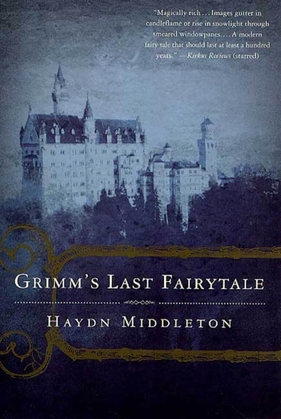 In September 1863 Jacob Grimm travels through rural western Germany with his devoted niece, Auguste-- who longs to learn, at last, the truth about her family-- and Kummel, their new and enigmatic manservant. As relations between the three reach the boiling point, Jacob's traumas and heartbreaks here in his original homeland are revealed in vivid flashbacks. Now, old, Jacob resists Auguste's attempts to make him take stock of his life, but memories that are repressed have a tendency to reappear in other places and in other guises.

Throughout Jacob's travels, he is reminded of the folk tales he and his brother Wilhelm collected in their Tales for the Young and Old. Although the brothers were renowned language scholars and passionate supporters of German unification, they were haunted throughout their lives by the Tales. Most notable is the feverish fairy tale of Sleeping Beauty, which holds a shattered mirror to a life, a country, and a history. The Sleeping Beauty recounted here is neither the Disney version nor even the Grimms' version, but an enchanting tale that goes beyond the marriage of the prince and princess to reveal the surprising truth behind the evil spell.

In his compelling historical novel, Grimm's Last Fairytale, Haydn Middleton re-creates the life story of literature's most famous brothers. It is a history that could almost be a fairy tale itself, with its fabulous changes of fortune, tests of duty and honor, arrogant princes, lost loves, and twisted family relationships-- all unfolding in a world of dark forests and even darker politics.