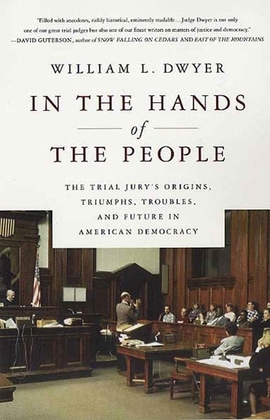 In the Hands of the People

In a passionate warning that is not only well-reasoned, as becomes a renowned former trial lawyer and present federal judge, but is also a compelling and entertaining read, William L. Dwyer defies those who would abolish our jury system and hand over its power to judges or to panels of "experts." He aims, by making his readers aware of what should be done, to help us save what he calls "America's most democratic institution."

In an overview of litigation's universe, Dwyer goes back several centuries to describe the often terrifying ways our ancestors arrived at verdicts of guilt or innocence. Tracing the evolution of our present-day system, he gives us excerpts from the actual records of such trials as that of young William Penn, arrested for preaching Quaker beliefs in public; the Salem witch trials; and the landmark civil rights trial of 18th century newspaper publisher John Peter Zenger, whose attorney was the original "Philadelphia lawyer." Along with these famous courtroom episodes are many never before described in print, all of them infused with the drama that gives life to the law.

Dwyer's language is clear and engaging - a pleasant surprise for readers apprehensive about legal gobbledygook. He has a store of courtroom "war stories," some inspiring, some alarming, many enlivened by gleams of the author's wry humor.

Underlying that humor, however, is the judge's fear that the jury system is endangered by neglect and misunderstanding, and could be lost without the public being aware of what is happening. The book shows that despite much adverse publicity, the American jury still works capably, at times brilliantly, when given a fair chance by the legal professionals who run trials. Consequently, the author deals with what has gone wrong with American litigation, the controversy over the jury's competence and integrity, and trial and pretrial reforms that must be made to save trial by jury and reshape American litigation in the twenty-first century.