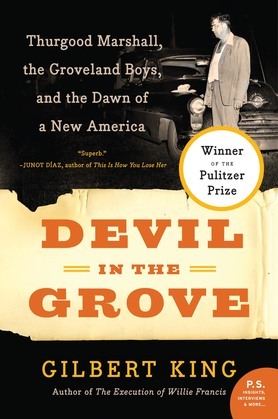 Devil in the Grove: Thurgood Marshall, the Groveland Boys, and the Dawn of a New America

Winner of the Pulitzer Prize

Arguably the most important American lawyer of the twentieth century, Thurgood Marshall was on the verge of bringing the landmark suit Brown v. Board of Education before the U.S. Supreme Court when he became embroiled in a case that threatened to change the course of the civil rights movement and cost him his life.

In 1949, Florida's orange industry was booming, and citrus barons got rich on the backs of cheap Jim Crow labor with the help of Sheriff Willis V. McCall, who ruled Lake County with murderous resolve. When a white seventeen-year-old girl cried rape, McCall pursued four young black men who dared envision a future for themselves beyond the groves. The Ku Klux Klan joined the hunt, hell-bent on lynching the men who came to be known as "the Groveland Boys."

Associates thought it was suicidal for Marshall to wade into the "Florida Terror," but the young lawyer would not shrink from the fight despite continuous death threats against him.