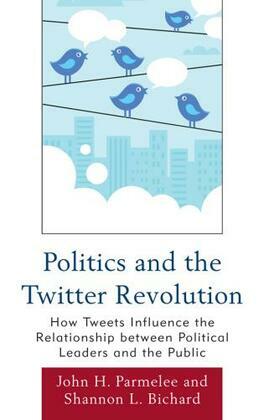 Politics and the Twitter Revolution: How Tweets Influence the Relationship between Political Leaders and the Public, by John H. Parmelee and Shannon L. Bichard, is the first comprehensive examination of how Twitter is used politically. Surveys and in-depth interviews with political Twitter users answer several important questions, including: Who follows the political leaders on Twitter, and why? How persuasive are political tweets? Is political Twitter use good for democracy?

These and other questions are answered from theoretical perspectives, such as uses and gratifications, word-of-mouth communication, selective exposure, innovation characteristics, and the continuity-discontinuity framework. In addition, content analysis and frame analysis illustrate how political leaders' tweets frame their policies and personalities.

The findings in Politics and the Twitter Revolution show Twitter to be surprisingly influential on political discourse. Twitter has caused major changes in how people engage politically. Followers regularly take actions that are requested in leaders' tweets, and, in many cases, leaders' tweets shape followers' political views more than friends and family. Other findings raise concerns. For some, Twitter use contributes to political polarization, and there is frequently a disconnect between what followers expect from leaders on Twitter and what those leaders are giving them.