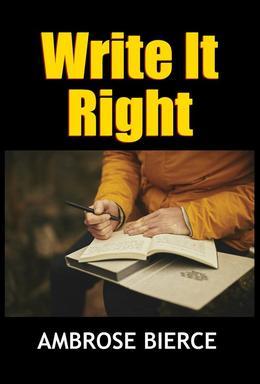 Amusing and thought-provoking, this A-to-Z compendium outlines common oral and written gaffes. Ambrose Bierce, a celebrated literary wit, assembled his informative compilation in 1909 from many years of observations and notes. He advocates precision in language, offering alternatives to grammatical lapses and inaccurate word choices.

*Moneyed* for *Wealthy*: "The moneyed men of New York." One might as sensibly say, "The cattled men of Texas," or, "The lobstered men of the fish market."

*Name* for *Title and Name*: "His name was Mr. Smith." Surely no babe was ever christened Mister.

*Juncture* means a joining, a junction; its use to signify a time, however critical, is absurd. "At this juncture the woman screamed." In reading that account of it, we scream, too.

Times and usages have changed considerably in the past century. Bierce's strict rules remain, however, a timeless source of interest for wordsmiths and lovers of language.

Bierce wrote this little book as a guide to improving writing. He states that precision is the key. Choosing the exact word and using it correctly is essential. Colloquialisms and vulgar language have no place is serious writing. A writer must use his values in determining what is appropriate. The lessons Bierce gives in this book are as appropriate today as they were a century ago.

Ambrose Bierce (1842 - 1914) was a short story writer, an editorialist, a satirist and a journalist. He is best known for his devil's Dictionary. His sardonic view of human nature and his tough stance as a critic earned him the nickname "Bitter Bierce". Despite his reputation Bierce always encouraged young writers. Bierce went to Mexico to get a first hand view of the revolution. He disappeared without a trace.

Despite his reputation as a searing critic, Bierce was known to encourage younger writers, including the poets George Sterling and Herman George Scheffauer and the fiction writer W. C. Morrow. Bierce employed a distinctive style of writing, especially in his stories. His style often embraces an abrupt beginning, dark imagery, vague references to time, limited descriptions, impossible events, and the theme of war.