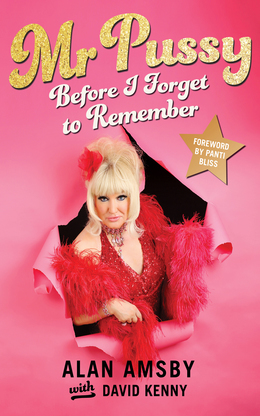 ‘The doyen of Irish drag queens … The original of the species … Mr Pussy is a riot’ In 1969, a young Englishman named Alan Amsby arrived in Ireland with a frock and a wig. He was booked for one week, but was an overnight sensation, and made Dublin his home. Catholic Ireland had never before seen anything like the beautiful and outrageous Mr Pussy. For almost fifty years, Alan has delighted audiences and demolished boundaries.

Here, he recalls his early days as a drag princess and model in Swinging London, partying the likes of Judy Garland, Noël Coward and David Bowie; being heckled by one of the Kray twins – and snogging Danny La Rue. He also remembers grey 1980s’ Ireland, shocking the country with its first adult panto, and losing friends to the Aids epidemic. Then there’s his 1990s’ renaissance, ‘doing time’ with Paul O’Grady and Daniel Day Lewis, and opening Mr Pussy’s world-famous Café De Luxe with Bono.

Full of hilarious celebrity yarns, sequinned characters like the remarkable Stella Minge, and a lot of shameless name-dropping, Mr Pussy is the story of a legendary, ground-breaking entertainer, full of pathos, charm and wit.