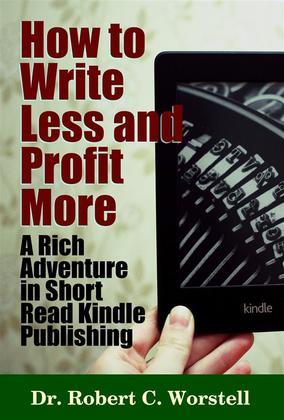 "Hidden in the book you're writing right now is a way to get more royalties.

Deep in the heart of the ever-growing Amazon Kindle jungle, there's a profitable underserved market which is not easily discovered. It sits in a clearing by itself, much like a massive stone temple rising above the forest. ...A temple with some gold-filled rooms.

We saw such an expedition hinted at by another well-known writer who began to pull down 6-figure income over the last couple of years with his non-fiction short books. But he never really explored the opportunities this area has. In carefully re-tracing his path, it showed me the turns he didn't take.

That inspired me to start my own journey around two months ago. I'm currently publishing an average of one short read ebook per week. And the results are promising, even at this early stage.

This path struck my fancy, as it told more about how to really use short reads as a business strategy. How to cement those 6-figures that writer started seeing. What I've discovered accelerates that progress, perhaps even creating your 7-figure income - from the same amount of writing.

There's a growing group of readers which Amazon has been catering to with their Kindle Short Reads.

They are called CBR’s - coffee break readers. They’re not just people who have never read longer books before... They’re anyone who has limited time to read for whatever reason. Their commute, their lunch break, while waiting at airports...

These people aren't stuck into a certain author, it's more like the certain type of entertainment they want: short stories which they can read in their available time.

The simple idea is that you can spend two months writing and editing an 80,000 word book and sell it for 4.99 on Kindle.

Which approach would make you more royalties?

If you use your books to generate email subscribers, which approach would generate more leads?

And then there's the point that there are far fewer books in these categories - particularly since the ""conventional wisdom"" says that longer books sell more.

This is a sideways review of Geoff Shaw's Udemy Course on Short Read Publishing.

Yes, if your book is written well (or if you want to edit it into this shape) any bigger book could possibly be turned into short reads. (These are called ""serials"".) But those habits are not easily changed. Certainly, this isn't being widely encouraged by the Big 5 Publishers or conventional wisdom.

This book itself is a test of this short read publishing system. It is being published as not just an ebook, but also a long-form blog post, a podcast, and two paperback formats. I cover inside how to use these multiple formats to further increase your royalties and book discovery.

The kicker is that this book was a three-day turnaround from starting to published works. (Or I could have sent it off for more proofing and written two more short reads while waiting for it to return.)

Would you like to make more income for the same amount of writing?

Scroll up to get your copy today."