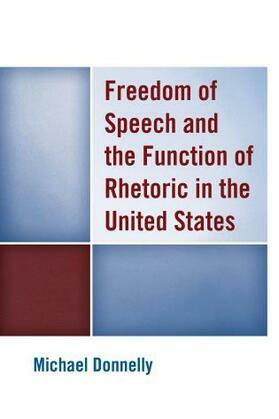 by Michael Donnelly (Author)
Buy for $39.50 Excerpt
Nonfiction Human science Language arts & disciplines Rhetoric Law Public Constitutional
warning_amber
One or more licenses for this book have been acquired by your organisation details

This book is about Freedom of Speech and public discourse in the United States. Freedom of Speech is a major component of the cultural context in which we live, think, work, and write, generally revered as the foundation of true democracy. But the issue has a great deal more to do with social norms rooted in a web of cultural assumptions about the function of rhetoric in social organization generally, and in a democratic society specifically. The dominant, liberal notion of free speech in the United States, assumed to be self-evidently true, is, in fact, a particular historical and cultural formation, rooted in Enlightenment philosophies and dependent on a collection of false narratives about the founding of the country, the role of speech and media in its development, and the relationship between capitalism and democracy. Most importantly, this notion of freedom of speech relies on a warped sense of the function of rhetoric in democratic social organization. By privileging individual expression, at the expense of democratic deliberation, the liberal notion of free speech functions largely to suppress rather than promote meaningful public discussion and debate, and works to sustain unequal relations of power. The presumed democratization of the public sphere, via the Internet, raises more questions than it answers—who has access and who doesn’t, who commands attention and why, and what sorts of effects such expression actually has. We need to think a great deal more carefully about the values subsumed and ignored in an uncritical attachment to a particular version of the public sphere. This book seeks to illuminate the ways in which cultural framing diminishes the complexity of free speech and sublimates a range of value-choices. A more fully democratic society requires a more critical view of freedom of speech.