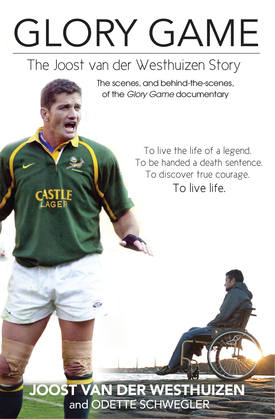 In 2011 the world was shocked when the news broke that Joost van der Westhuizen, known for years as the golden boy of South African rugby and a former Springbok captain, had been diagnosed with motor neuron disease (MND). This rare condition attacks the central nervous system, causing progressive disability. There is no known cure.
All who have seen Joost in action will know that he is not one to give up without a fight. His game-changing prowess as a brilliant scrum half is now focused on a battle for survival and, more importantly, on making a difference to the lives of others with the disease.
In a race against time, Joost has a dream to fulfil. He says: “In the beginning you go through all the emotions and you ask, ‘Why me?’ It’s quite simple. ‘Why not me?’ If I have to go through this to help future generations, why not me?” His acceptance of his symptoms is equally pragmatic: “One day you can’t move your arm, another day you don’t have speech. Every day you are reborn and you take the day as it comes.”
Glory Game – The Joost van der Westhuizen Story is a compelling narrative of redemption set against the backdrop of an illustrious career in rugby. It is the story of a modern-day warrior forced to face his own human frailty. Joost shows us that beyond ambition, success and fame lies the true wealth of family and friends, and that within a ravaged body the spirit can remain invincible.