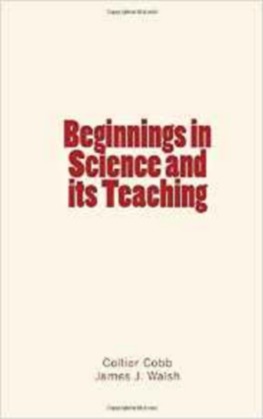 Beginnings in Science and its Teaching

by Collier Cobb (Author), James J. Walsh (Author)
Buy for $2.99 Excerpt
Nonfiction History Other Essays
warning_amber
One or more licenses for this book have been acquired by your organisation details

The medieval universities and the school-men who taught sciences have been particularly blamed for their failure to occupy themselves with realities instead of with speculation. We are coming to recognize their wonderful zeal for education, the large numbers of students they attracted, the enthusiasm of their students since they made so many hand-written copies of the books of their masters, the devotion of the teachers themselves, who wrote at much greater length than do our professors even now and on the most abstruse subjects, so that it is all the more surprising to think they should have neglected science.

"Long before the sciences were pressing their claim to equal rank with ancient learning at Harvard, before Jefferson had seen the establishment of the University of Virginia working under the system of elective studies which he had planned, or before the magnificently endowed institutions of technology were giving what Herbert Spencer regards as knowledge of most worth, we find the beginnings of these things in the newly established university of a State that could boast of only two schools which taught more than the three R's and the very rudiments of the English language..."