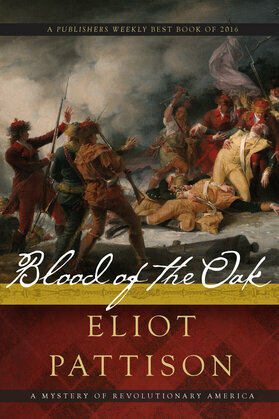 Blood of the Oak: A Mystery

Duncan McCallum #4
by Eliot Pattison (Author)
Fiction Mystery & Detective Historical English literature American and Canadian literature
The fourth entry in the Bone Rattler series moves ever closer to the beginning of the American Revolution and advances the protagonist Duncan McCallum to 1765 and into the throes of the Stamp Tax dissent, which marked the beginning of organized resistance to English rule. As the story unfolds, Duncan is drawn into the mystery of ritualistic murders that are strangely connected to both the theft of an Iroquois artifact and an additional series of murders and kidnappings connecting to the network of secret runners supporting the nascent committees of correspondence—which are engaged in the first organized political dissent across colonial borders. In following the trail he encounters a powerful conspiracy of highly placed English aristocrats who are bent on crushing all dissent. Duncan is captured by its agents, and sent into slavery in Virginia beside the kidnapped runners. Inspired by an aged native American slave and new African friends Duncan decides not just to escape but to turn their own intrigue against the London lords.

Included in the novel’s cast of characters are figures from our history who have their own destinies to fulfill in the next decade, including Benjamin Franklin (writing from London), Samuel Adams, the early Pennsylvania rebel James Smith, Dr. Benjamin Rush, and, very briefly, a soft spoken militia officer named Washington. The Blood of the Oak takes a fresh view on the birth of the new American nation, suggesting that the “freedom” that became the centerpiece of the Revolution was uniquely American, rising not just from unprecedented political discourse but also from the extraordinary bond with the natural world experienced by frontier settlers and native tribes.