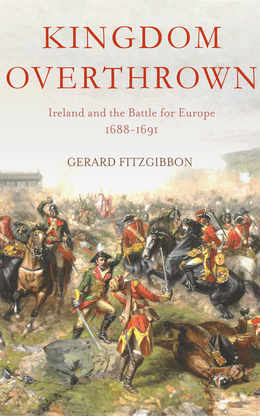 ‘As the Williamite troops began to gain a foothold in the street beyond the breach, the Jacobite soldiers rushed out from cover and crashed into them. The most furious and cruel hand-to-hand fighting of the war began. For almost four hours men
punched and clubbed and wrestled and stabbed each other, and a few square yards of Limerick city descended into a vision of hell. Eyes burned with dust and smoke, while men and women hurled rocks and broken bottles down on the Williamites from windows and rooftops. Humanity and mercy had no place. In the bloodlust of the moment, the only desire of all these humans was to “ruin and undo one another.’

Seventeenth-century Europe was a theatre of almost endless rivalry and destruction, where wars of religion and dynastic succession wreaked havoc across the continent. Kingdom Overthrown: The Battle for Ireland, 1688-1691 tells the story of the Williamite War – in which Ireland became the unexpected stage for a truly European struggle.

To the Irish officers who served in both armies, it was a fight for control of land, property and influence. It was also part of a pan-European war that would have far-reaching consequences: it saw the last ever confrontation on a battlefield between two claimants to the English throne, William of Orange and King James II, and it featured many intense and gruesome clashes, including the Siege of Derry and the battles of Aughrim and the Boyne.

Driven by first-hand accounts of soldiers and officers in both armies, collected from historical manuscript collections, correspondence and personal memoirs, Kingdom Overthrown presents an accurate, and above all human, account of one of the most destructive conflicts ever fought on the island of Ireland.