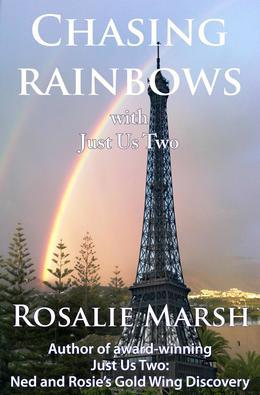 Chasing Rainbows: with Just Us Two

Chasing Rainbows is the second in the Just Us Two series by Rosalie Marsh and the real end to Rosie's Gold Wing story. A peep into Rosie's life as,with tongue-in-cheek humour,she pokes fun at herself while she conducts a love-hate relationship with a hidden controller. You know boys and their toys?

Rosie pleads for maps as they return to Ireland across Cavan,Sligo,Galway,beautiful Westport and Ballycroy in County Mayo which Rosalie describes evocativally and with feeling. The fun then really started when the phone rang and another trip was on the horizon. Rosie with her usual 'let's go' stuck pins into maps which almost became redundant.

Chasing Rainbows is enhanced by detailed routes and photographs to guide you as 'Just Us Two' return to the awe-inspiring Andorran mountains to meet with Gold Wing motorbiking friends; explore the majestic French Alps and Spanish Pyrénées; and retrace their steps through the notoriously challenging Pas de la Casa, Têt Valley and Central Massif, north to Versailles where Rosie has another adventure planned.

Chasing Rainbows (also available as an e-book) is the sequel to award-winning Just Us Two: Ned and Rosie's Gold Wing Discovery. Photos are in colour in the e-book.