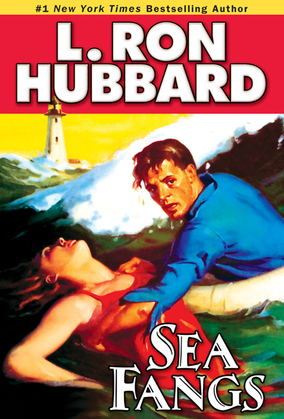 by L. Ron Hubbard (Author)
Fiction Action & Adventure English literature American and Canadian literature
Bob Sherman has a strength of character that would make Spencer Tracy proud.  But he’ll need every ounce of that strength to overcome the forces arrayed against him now—hurricanes, corruption, pirates . . . and the man who stole everything he valued in life. But as he’s about to discover, there’s one force more powerful and dangerous than the sea itself . . . the force of a beautiful woman’s love.

Hubbard had vast experience at sea. By the time he’d written this story, he had traveled twice to China on Naval vessels, had signed on a twin-masted schooner plying the Chinese coast, and had organized a five-thousand mile expedition aboard a four-masted schooner. He had first-hand experience of the violence of the sea—and of the men who ply it—as he depicts in Sea Fangs.

“A must for his legions of fans and an impressive tribute to his storytelling skills.” —The Midwest Book Review