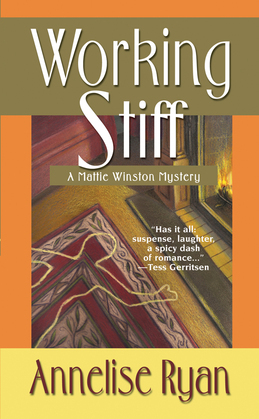 Mattie Winston #1
by Annelise Ryan (Author)
Buy for $18.70 Excerpt
Fiction Mystery & detective Women sleuths English literature American and Canadian literature
warning_amber
One or more licenses for this book have been acquired by your organisation details

In this hard-boiled mystery series opener, a former nurse becomes a coroner who winds up investigating her cheating ex-husband for murder.

When Mattie Winston catches her husband Dr. David Winston receiving some very special loving care from R.N. Karen Owenby, she quits her job and moves out. Mattie’s best friend Izzy offers her a place to stay and suggests she’d be a natural as deputy coroner. Now, instead of taking patients’ pulses, Mattie’s weighing their hearts and livers.

But Mattie’s first homicide call turns out to be for none other than Nurse Karen, and even though she saw her ex in a heated argument with the newly deceased the night before, she refuses to believe David could be a killer. Keeping mum about what she saw, Mattie is also left speechless by the sight of hunky Detective Steve Hurley . . .

From learning the ropes on her new job to sorting out her feelings about her ex and dealing with her growing attraction to Detective Hurley, Mattie's in deep water and in danger of sinking quickly, especially when she places herself dead center in the path of a desperate—yet determined—killer . . .