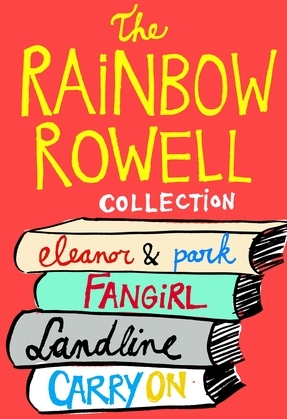 #1 New York Times bestselling author Rainbow Rowell has captured the hearts of readers all over the world. Now, for the first time ever, four of her critically acclaimed novels are together at last in one e-bundle. Discovering your new favorite author has never been easier!

Eleanor & Park
Set over the course of one school year in 1986, this is the story of two star-crossed misfits-smart enough to know that first love almost never lasts, but brave and desperate enough to try. When Eleanor meets Park, you'll remember your own first love-and just how hard it pulled you under.

Fangirl
Cath and Wren are not only identical twins, they are also the two biggest Simon Snow fans ever. Or at least, they used to be. Now that they are starting their freshman year of college, Wren is moving on to new things and leaving Cath behind. But Cath isn't quite ready to let go.

Carry On
Carry On - The Rise and Fall of Simon Snow is a ghost story, a love story and a mystery. It has just as much kissing and talking as you'd expect from a Rainbow Rowell story - but far, far more monsters.

Landline
If you got a second chance at love, would you make the same call? When Georgie McCool discovers a telephone that allows her to call into the past, that's exactly the question she must ask herself. Landline is a heart-wrenching - and hilarious - take on fate, time, television and true love.