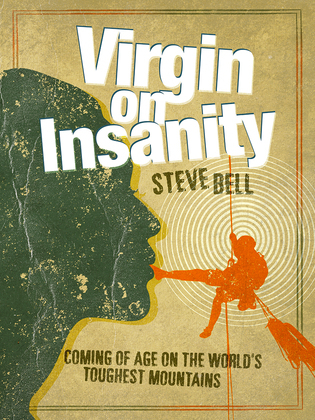 Outwardly, ‘Britain’s most experienced teenage Alpinist’ is a brave young mountaineer. But he’s not experienced at all, at least not in the way he really wants to be. Behind his death-defying climbs there lurks a great deal of fear – fear of the opposite sex, fear of failure, fear of not being ‘man enough’.

He seeks manhood in the mountains, yet he believes he will only truly gain it by losing something. Harrowing escapades in Scotland, the Alps and Alaska are interspersed by excruciating sexual encounters and unsettling hitch-hiking rides. When the mountains fail him, he seeks meaning with a religious cult in Colorado. Eventually he succeeds in his quest, only to find that he’s lost more than he bargained for.

Virgin on Insanity by Steve Bell is a coming-of-age story of high adventure, youthful insecurity and immature love. The situations might be extreme, but the deeper issues will be familiar to many.