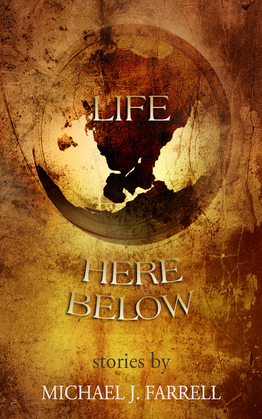 A dippy photographer shoots talking donkeys and invisible strangers. A professor who in his youth vowed to kill Ian Paisley has so far failed to do so. A brash young journalist wants the local paper to save the world, but the editor prefers football.

Only a thin veil separates the world we think we know from the other universe we suspect. Does a son always know his father and vice versa? When a large old duffer gets stuck in Newgrange, can love provide a way out? Why can’t the future be obvious as the past? Michael J. Farrell insists his stories are what people brood over in the small hours until some see the light. What they see is the fragile earth redeemed time and again by surprises.

Ballinasloe may seem an odd beginning of the end of George W. Bush. A saintly old archbishop and a worldly new bishop climb Croagh Patrick together, ecclesiastical chalk and cheese each in search of a different end of the rainbow. New arrivals find one astronaut too many at the International Space Station. Life here below, Farrell contends, would be a dire place without insights and epiphanies and, of course, porter.

‘This is a great collection. The stories surprise, and are full of surprises. They are funny, provocative, clever, charming and quite brilliantly written.’ – Roddy Doyle

‘It is always bracing to begin a book with no expectations—no advance praise, no foreknowledge of the author—and then to find oneself irresistibly ensnared by its originality and wit…Farrell’s tone is so assured and his linguistic touch so deft, he makes such improbabilities seem not just likely but in the natural order of things. And he can be very funny, too.’ - Irish Independent

‘With a simultaneously puckish and intellectualist sensibility that would be at home in the worlds of early Beckett, and of Flann O’Brien, Michael J. Farrell embarks in Life in the Universe on a kind of probing trip to find out if there is life yet in the light up above, and light in the life here below. Such a title in other hands might be facilely grandiose, but in Farrell’s hands it is a glory’ – The Irish Times

‘Michael J. Farrell proves himself a master of the opening line….Thankfully, he manages to sustain the momentum from beginning to end in these fine, funny and frequently absurd tales set in a rural Ireland which is somehow both recognizably contemporary yet tempered by age-old parochialism….Farrell wears his learning lightly in a collection that explores such diverse subjects as race, the role of art in society, and life in the information age, doffing his cap to Samuel Beckett and Flann O’Brien along the way.’ – Metro