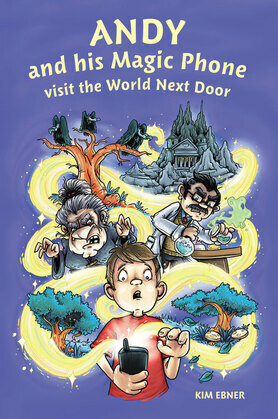 Andy and his Magic Phone visit the World Next Door

When twelve-year-old Andy is given a secondhand cell phone for his birthday, it's a dream come true. But what Andy doesn't realise is that his phone contains secret and magical powers. Within just a few hours of turning on the phone, he is swept up into an adventure of magnificent proportions. Receiving cryptic text messages, meeting a mysterious stranger and being whisked off to what he soon learns is 'the world next door' is just the start for Andy. A wonderful web of fantasy, mystery and new friends begins to unfold around the amazed Andy as he discovers the secrets of this new world. But when he loses his phone, he can't get home. And the world is changing. Evil Elvira has arrived and she has plans of her own. Trapped in 'the world next door', Andy must now embark on a mission to find his phone. Can Andy save himself and his new friends before Elvira takes over?